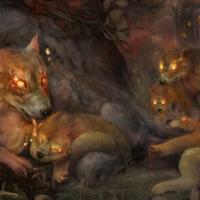 I'm about as outside the box as they come.

You'll know why if you ask.

I need a lot but I matter too. I also give everything I can back when possible. I won't deny myself pleasure with condoms and I've had half a year of problems that makes me deathly afraid of a vasectomy (Hey, most people don't have that kind of problem and lose most of the feeling in their dick for that long, ok. Fine for now but that's not a risk I'm willing to take). On the other hand I wouldn't want someone to feel like they have to be on birth control or otherwise "snip" themselves but at the same time I question if you never intend to have kids anyway and never had problems down there like I have then I ask why not. Me aside I imagine it would mean more getting around for you and I for one don't mind if others are engaged with. Long as "we" still make the time for each other of which I trust would happen. I'm hoping people don't get the wrong idea when I bring that up. Just putting it here and letting it be known that I will make it worth the hassle. Provided we talk and like each other of course. Got an open mind? I probably like you already. If you think I'm full of it then give me a chance to prove myself.

For the record my libido is fine now. And no, I'm not "focused on only sex" (I am kinky though). There's much much more to me then that. I just had to cover this one because I want to make it clear and not feel like a jackass having to explain it later rather then sooner. Any other topic I can get into just fine. I actually enjoy talking about things like positive fear and anger and how they tie in with punishments and rewards along with "playful yet serious" flirting and bonding and the like.

On another note, no, I don't want to worship you and give you money "just because". Loyalty is earned and I'm lifestyle. My loyalty is actually easier to earn then most since I'm understanding on a lot of things but not if you place expectations and obligations on me without communication. Get to know me, I'll get to know you. Add in "how we affect each other and do the things the other likes". There's much you can do with me and my limits are few and likely not what you expect (I go into extremes. I do it safely). I can even guide another into enjoying being with me and have done so with others more then once. You yourself have to be willing to handle me in the ways I enjoy as well as remain firm and direct with me. Because that's people 101. Controlling the situation even if not the person (I of course enjoy being "directed"). I in turn will need to be there for you to the best of my ability. Which might even mean doing a little directing of my own if I feel a good dose of "blunt honesty" is needed for example. It's amazing how an angry ex gets one to see the appeal of D/s after you're understanding about fear and anger while holding the no blame stance. Stories beyond that but that's for another time.

If we ever get that far I've already been there. Just talk to me, exchange viewpoints and get to know each other. The rest falls into place. Always does if I go out of my way to be there for someone I take an interest in. Making others happy is how I make me happy. Selfish as it is selfless.

Speaking of sex, I need to care about you and be close to you in order to "feel it". I don't "just fuck". I go out of my way to please you. And nothing turns me on more then knowing another is there for me as much as I am for them. Give my leash a good, hard yank and pull me close to you and all the better. A "harsh" form of affection perhaps. I'd trust in that. Of course such a thing could also be done to pull me into striking range for a punishment but that's part of the fun for me. Facing the unexpected and unknown. Wondering if I been good or bad enough and which will come next.

As for good and bad, that's subjective. Everyone has their own way of being handled and handling others. Doms and subs and even those that aren't alike. I want to be treated in ways I like and don't like. To be punished with reason and without (keeps me guessing). As long as it's interactive and engaging then it's all in good "fun". Though of course it can be very serious too. Yet with the goal of long term happiness in mind.

Also I take the bad with the good of things. Caring enough to be there at someones worst. And even to suffer for them. Long as there's good stuff there as well and things even out it's all fine. Naturally the logic works both ways. It's a simple saying I have. "If you can't accept me at my worst, you don't deserve me at my best." My other saying is "Loyalty over morality". This one is explained simply enough. I don't try to be a good person. I try to be loyal.
Limits
Very few really. Neglect goes without saying of course. It's not very engaging when I'm left on my own (Sticking me in a cage or leaving me tied up somewhere for a while can be fun though). Maybe not mess with the nipples, since those can be permanently damaged. Despite that I will take pain even to extremes.

Oh, there is one I put my foot down on. Others matter. I don't decide how others are engaging with each other. I shall not stand for it being done with me. It's always "In a different way" because everyone's different too. In any event the time we share together is always "our" time and not that of others. I will make the time for you if you make it for me.

Also I will be here in the ways I am. Not the ways you want me to be. Expect less from me and you'll get more from me. I love being used and even abused. Place expectations on me unasked for or without talking to me about it and it's going to be an issue (That said feel free to spring things on me). I shall of course expect nothing from you either. You will do as you will and be here in the ways that you are.

Oh, and lack of communication. And don't compare your past experiences to me. I'm me, not others. You're you, not others. We all have concerns about how we treat others and how they treat us but just because a bad thing with X subject happens with X person does not mean it will go the same way with person Y. Can be as something as simple as a kink or something more personal like trusting yourself to be there for someone because you hurt others in the past. The question I ask myself when I get to know someone is "Do I trust myself with THEM". I do not expect such trust at the start. I will work hard to earn it. If you mistrust me though it better be something I did. If there is a concern talk to me about it and don't fear the worst without even talking to me about how the subject affects me. I in turn will do the same with you. Without knowing each other trust is absent. Few things bother me more then someone fearing the worst of me at the first opportunity and avoiding me before even giving me a chance or getting to know me. I bet such things bother you when people flee in terror without checking in with why something bothers you too.
What's new
New? Well I gotten to know people with trust issues lately. I seem to have a knack for zoning in on peoples fears and helping them overcome them. Tends to be on a personal level. Sometimes on a more "Professional" level if someone comes to me. The later can lead to the former too. It's never about "Knowing better". If you're telling me something doesn't bother you when you're ranting about it though I'm putting my foot down and calling BS on it. Not because it bothers me, but because you wouldn't be being honest with yourself, which people can be hard on themselves for. Speaking from personal experience on this one. Deluding yourself can end very badly. Especially when you fool yourself into thinking you're an uncaring monster that has to be perfect for everyone. What's more no one ever knows best for others. For example: Do NOT assume trying to spare my feelings will "protect" me. It has the reverse effect if anything. And that "Flaw" you're blaming yourself for? Could be one of the things I love about you. Even mistrust can have a posative effect at times, when it's applied to a specific situation. I may or may not get out of line if I'm uncuffed, as an example. Doesn't mean it's a bad thing if I do either. Catch on to it and leave me cuffed and I'll appreciate that you noticed. If I never got out of line you'd never have a reason to put me in it. That can be really fun.

That reminds me, don't spare my feelings. The logic is "Fear silences tongues". Got an issue with me? bring it up. Remain silent? Let the issue remain unresolved with me not knowing what it even is and being unable to do anything about it and hurting you when I don't even know that's what I'm doing. And that's the last thing I'd want to do. Which is why I won't spare your feelings either. Logic, honesty and truth. These are the things I value most. Though sometimes it can be fun to not tell me something with a more "playful" subject. Getting me to figure out how to be good or bad for example. But if it's a "serious" matter, again, communication. I had to talk someone into being more honest with me not too long ago. Despite having to say "This is why you're hurting me and not being nice to me" (Which can be hard to say, which is why I'm understanding when people struggle too) we ended up laughing things off some minutes after.
Update date
Wednesday, June 20, 2018
Member since
Tuesday, August 22, 2017
144  Forum posts
Send a message
Follow us on twitter