I have written a blog on line for many years at TheEroticist.Com. (Lucky to get that Domain.) It is currently going through housekeeping with a new Theme, but it is still available for viewing.

As an introduction, I thought, over the next few days I might port over some of my earlier posts from my main. When I do get inspired to add a new one, I will probably post there and copy here. Please feel free to comment.
To the blog   Posts Follow blog

I have been alone, without a kink partner for a little over a year.  The parting was difficult as it involved some complete untruths or half truths.  It took me many months to get even close to being open to finding another partner.  But I know enough of myself  to know that a long term bonded D/s or M/s (preferably) is necessary for my continued happiness.

So, on The Cage, I began looking through adds, an extensive endeavor.  As I live in the Austin area of Texas, I looked in Austin.  Then opened it out to central Texas, then Texas as a whole, then neighboring states, and finally, every add from any area within the United States including Hawaii and Alaska.  I can not say I did not talk with many delightful and engaging people, but no one that seemed to definitely click with my desires and interests.  I must say that this was a touch depressing.  The idea of beginning any form of relationship with someone who did not even live in the same country and probably not even a citizen when what I wanted was a long term, live-in, life bonded relationship seemed, to say the least, a bit overwhelming.  So I stopped, a bit resigned.

Then what seems like many moons ago I received a letter from a young lady who understood she was not what I was looking for (lived in the Netherlands) asking if I might be open to answering questions or giving advice, which I was.  I will not go into major details, but the texts moved into video calls, questions and answers moved into affectionate comments, deeper understanding and attraction.

But let me express clearly the challenges here.  Obviously there is the long distance element.  5000 miles is not to be sneezed at.  It does not allow that slow acquisition of knowledge and familiarity that comes from meetings for coffee and weekend dates.  Here I wish to Highly complement this woman.  Before long she said that it was necessary we meet, and she would buy the ticket to Texas and stay with me.  She had two weeks vacation. What an incredible commitment.  There was no indication that she would expect me to be responsible for travel expenses.

Add to this that she is half my age.  Because I was born shortly after the Civil War, this was not a case of her immaturity.  But there is a distinct difference of history between us.  With age and location contrasts, our earliest memories are beyond different.  This profoundly effects the third element.

It is tempting for a Dominant to assume they are, at some level, in charge.  That when a person tells them that the Dominant "Owns" them, that implies some level of permanent lasting reality, when, in fact, it is a moment to moment agreement between two people who are obliged to express their own and understand the other's expectations.  In actuality, it is an authority exchange.  One person, again moment to moment, gives authority over some aspect of themselves to a person of their choosing.  I tend to think that my role as a Master is only as a "manipulator".  The important element here is my intent.  While I can not claim I universally maintain this, but my intent is to increase the physical, mental and spiritual health of anyone who gives me authority, and greatly to increase our mutual JOY,

After her visit to Texas, it seemed obvious to me that this relationship was worth the work.  I immediately made plans for a visit to Rijswijk (Yea, YOU pronounce it.)  I committed to a month and that was extended at her request and my joy for an additional month.  Another visit to Texas is planned for late this year to be followed with high hopes by another visit to Europe and a final trip back to Texas together.

DewofHermon​(sub female) - So happy for you find a potential lifetime companion. May God bless the rest of your journey with many joys and fruits. 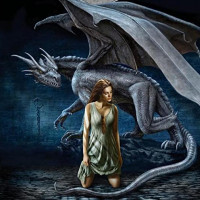 moll​(other female){owned slav} - Wow. I have to say, or rather write, that you come across as a very patient man. That is rare these days. Most people want instant gratification and you seem to be willing to put in the work to build, not just a relationship, but a strong bond.

Kudos and best wishes for you and your lady.

Arach{Say Please} - The patience must last longer. At this point we do not see the move for perhaps a year.

Arach{Say Please} - As I said in my profile, I play WoW. One character is named Arach and his companion is a spider named Nid.

Water Lioness​(sub female) - Congratulations. I'm very happy to hear that you may have found the One. Indeed, the journey is long. I wish you long lives together in happiness and peace.
Pam